train with the best 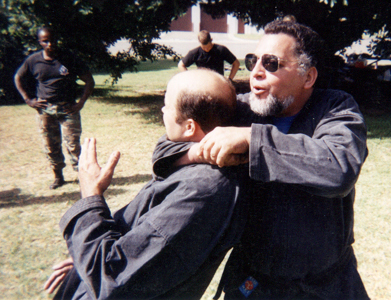 Master Juan M. Meza started his training with Grand Master Jimmy H. Woo in 1968. He received his black belt in October 1971 and earned the title of Master in January 1981.  Master Meza has taught for Grand Master Jimmy H. Woo in Studio City, for the Kung Fu Club at UCLA, for the Recreation and Parks at Beverly Hills High School.  He has given special classes and seminars for the Marines at Camp Pendleton (1st Force Reconnaissance), for the Border Patrol (Instructors Headquarters) in Chula Vista, for various police departments, and for the instructors of these special elite forces. In 1996, he opened the Dap Ga Kung Fu San Soo studio in Whittier where he teaches today.  He also gives private lessons to top belts and instructors.